Did anyone read the puff piece David G. Savage wrote about Clarence Thomas for the L.A. Times last Saturday?

Savage writes that what defines Thomas' career is his tendency to go solo on his opinions, "a tendency that was almost certainly reinforced by his bitter and ugly confirmation fight in the Senate..."

Uh huh.  Opinions Thomas has written from the highest bench in our nation, opinions which Savage noted include prisoners having no constitutional right to be protected from beatings by guards and teenagers and students having no free-speech rights at all, stem from Anita Hill's allegations of sexual harassment, which were later proven to be more correct than false.

What Savage neglected to say - at all - is that Thomas' ethics are once again in question, so much so that the very rules about how Supreme Court Justices may conduct themselves are now under scrutiny.  A bill called the "Supreme Court Transparency and Disclosure Act of 2011" (HR 862) is pending in the House of Representatives.  In addition, a movement to impeach Thomas is gaining steam.   You'd think an L.A. Times piece about Justice Thomas which was syndicated in many other papers nationwide would at least mention those facts. 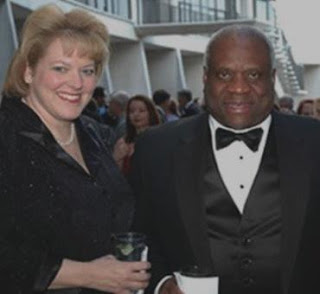 It would be enlightening for readers to remember that Thomas neglected to disclose his wife Ginni's $680,000 income from the Heritage Foundation.  (That was reported in January by L.A. Times writer Kim Geiger.)  But how many connected those dots from reading the Savage piece?  I, for one, would like to see mention of all relevant facts in one story.

What's keenly interesting is that both a Google search and an internal site search of the L.A.Times reveals the paper has never reported on how Thomas' friend, Harlan Crow, gave Thomas' wife, Ginny, $500,000 to form a Tea Party group to oppose President Obama's healthcare reform law.  (An earlier piece co-written by Savage and Kathleen Hennessey does raise the topic, but does not cite the fact that Crow, a personal friend of Thomas, is the funder.)  Crow is also reported to have given millions to a pet museum project of Thomas, as well as use of his private jet.  Nor is it reported that Ginny engages in lobbying activities about healthcare issues without filing required disclosures.

These ethical lapses become all too relevant when it is understood that the Supreme Court is certain to decide the constitutionality of Obama's healthcare law.  David G. Savage does report that Thomas "is seen as a sure vote to strike down President Obama's healthcare law and its insurance mandate."

So maybe you'd like to tell us "the rest of the story," David?

This is an excellent and insightful post. I would add that the New York Times reported in depth about the Harlan Crow connection, which you can read here: http://www.nytimes.com/2011/06/19/us/politics/19thomas.html.

Also, you can read a blow by blow, in-depth account of all the known improprieties Thomas and his wife committed at www.protectourelections.org. Of special interest are all the pdfs of Thomas' belated financial disclosures, the profit he and his wife were able to make after rulings on his benefactors' behalf, and the specific text of letters Atty. Kevin Zeese has filed at both the DOJ and the FBI. That specific link is here: http://protectourelections.org/index.php?q=docs

Finally, there is a very active page on Facebook that organized syncrhonized event on the phone and internet to keep up the pressure for formal investigation of his crimes and impeachment. Like us at http://www.facebook.com/pages/Impeach-Clarence-Thomas/214933201871327 and friend Ic Thomas for a personal invitation to our next "cyber flash mob."

Just the look on Thomas' face says it all. He looks like an evil gnome. I hope we can get rid of him and some of the other bought-and-paid-for justices on the court. They are disgracing a fine organization.

Sue Wilson Reports
Sue Wilson tells important stories which move politicians to act. She is the Emmy winning director of the media reform documentary "Broadcast Blues" and editor of SueWilsonReports.com. Broadcast Blues sets its sights on media policy, and www.SueWilsonReports.com turns a critical eye on the media itself. She recently formed an activist site, http://www.MediaActionCenter.net