December 12, 2011, Occupy Sacramento joined the Media Action Center and Sacramento Media Group in an action we called "Occupy Clear Channel." Activists in eight cities joined in the action.
.
We held a press conference in front of KFBK, the Clear Channel station which launched Rush Limbaugh, protesting its secret middle of the night decision to put Right Wing talk radio on a third giant frequency in Sacramento, while offering zero opportunity for alternate political speech.   We asked that Clear Channel hold a public forum for the public to air its grievances.

Why We Occupy Clear Channel

Why did the Media Action Center and the Sacramento Media Group and Occupy Sacramento occupy Clear Channel radio stations in Sacramento Monday? (note: Groups throughout the entire country supported this action.)  The corporate giant recently took music off its 92.5 FM frequency and chose to simulcast KFBK programming (Rush Limbaugh, Sean Hannity et al) on that 50,000 watt station.  That means Clear Channel is now broadcasting "conservative" right wing political opinion on three huge frequencies (KFBK, KGBY, and KSTE) on more than 120,000 watts of power.  (Note below, the lonely Air America station we once had in Sacramento broadcast over just 1,000 watts of power;  it was the only available frequency AA could get in this community.)


There's a mournful hush in Sacramento these days, the empty sound of an entire political viewpoint quieted.  32,000 weekly listeners who once tuned to KSAC 1240 AM  to hear partisan Democrats beat up on George W. Bush, now hear only Christian hiphop.

There's nothing wrong with Christian HipHop; it's a great outlet for artists breaking out of the gansta rap mold.   But there are six other commercial radio stations licensed in the Sacramento area programming the Christian message.  In the political realm, three local radio stations program 264 hours of partisan Republican radio talkers beating up on Democrats every week.   Now, zero stations program any Democratic view whatsoever.   264-0.

This follows the national trend revealed in the 2007 Free Press and Center for American Progress study, "The Structural Imbalance of Political Talk Radio."  Nationally, 90% of commercial talk radio is conservative, only 10% is liberal.   (This study does not include Public Radio, which by statute is required to provide differing points of view; one is as likely to hear a Republican's views as a Democrat's.  And NPR hosts don't beat up on anybody.)

KSAC shared another characteristic with other liberal radio stations: it had a tiny, 1,000 watt transmitter.  Tough for a little station which barely reached Sacramento's suburbs to compete with 50,000 watt giant KFBK, whose signal stretches from Chico to Modesto, from Reno to that little town of San Francisco.  Despite  KFBK reaching millions more potential listeners, KSAC mustered an audience nearly 20% that of KFBK's.   (Its ratings were double local conservative station KTKZ, which has a 5,000 watt transmitter.)  And Arbitron showed the progressive station's audience was steadily growing.  KSAC was the little station that could.  Until it couldn't.

Occupy Clear Channel - the day after

Yesterday, about 25 people came together in Sacramento to ask the community's largest radio owner, Clear Channel, to provide an outlet for Alternative talk radio.  As the big company only puts "Conservative" talk radio over the air in more than 90% of the country, they are effectively denying Freedom of Speech to the rest of us in the public square of radio. 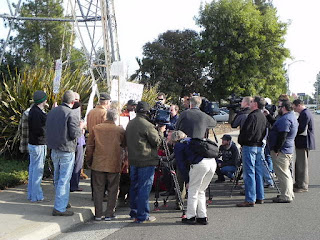 We entered the building to inspect the stations' public files (since we the people own the airwaves, the stations are required to report to us.)  And allies in Washington DC, San Francisco, Milwaukee, Madison, Sarasota, Jacksonville and West Palm Beach (Rush Limbaugh's newly adopted hometown) joined our effort.  We'll have report as soon as we can compile it!
No comments: