Dear AOL Members: AOL is Censoring Your Email ... And you have never been told

If you use an AOL email address, AOL is doing you the favor of making sure you do not receive email containing any links to BradBlog.com in it.
Not email from a BradBlog.com address, mind you, as if I were a spammer or something (which, obviously, I'm not), but any email from anybody that has a link to this site, or to one of our news stories.

I learned this swell news early this week when someone was kind enough to let me know that their attempts at sending a link to this site to a friend bounced back to them with an error message. That error message was "HVU:B2". What is that error?:
That's right, "substantial complaints" from someone, whatever that means, will result in no links to stories at The BRAD BLOG getting through to any of AOL's millions of members. And they will never know about it.

Again, these are not even emails from BradBlog.com. They are simply emails from anybody to any AOL email address which has my domain linked in the body of the email.

Neat, huh? I wonder what would happen if there were "substantial complaints from AOL members" about, say, FoxNews.com? Or MSNBC.com? Or NYTimes.com? Would that result in millions of members not being able to receive any email that links to anything at those sites? Sounds like a great way to ratfuck someone you don't care for politically, doesn't it?

So what did I do about this? What level of hell have I had to descend to over this past week in trying to solve this problem?...

So far, I've spoken to at least 10 different AOL support people on the phone, since clicking the "support request" URL they offer in the error message seen above actually takes you to someplace on the "AOL Postmaster" that doesn't actually give you the form you supposedly are to fill out to deal with this issue.

It took a day or two, and several more calls to more very nice AOL tech support people who told me they couldn't help me in the slightest, but a friend did some digging and finally figured out that this form is the one to fill out to deal with this particular problem. Or, at least, it's supposed to be.

After filling out that form, I was given a webpage with a message to the effect of: "Thank you for filling out the form. We will send a confirmation email to you with instructions on how to proceed."

They were very very sorry, but all that they could advise was that I fill out that form again and wait for a confirmation email that would never come.

In the meantime, today I received dozens of automated emails from my own mailing list program --- the one that I use to send out news alerts to media folks --- informing me that dozens of AOL members on that list had been automatically unsubscribed today because notes to them had bounced more than 3 times (that's one of the settings in my maillist program.)

After a few more calls to tech support today, asking nicely, then begging, then pleading for a solution, begging to speak to a supervisor, someone, anyone, who could help, I was again told there was nobody I could speak to, the call could not be escalated, I could not speak to a supervisor, that I should go fill out that form to solve this problem.

I asked for a corporate AOL phone number where there might be someone who could help, and was --- finally, after much begging --- given one. It turned out to be the 800# to the AOL billing department instead. You'll be shocked to learn they couldn't help either --- but they did recommend that I fill out that form at the "AOL Postmaster" page!

I finally looked up the AOL corporate website online, found the numbers for the "Corporate Media Inquiries" department, figuring I'd either get help or get an on the record comment about this mess and about the fact that AOL is censoring members emails for them, and spoke to another very nice person whom I told about the situation, explained that I was a journalist, not a spammer (and besides the notes being rejected didn't even need to come from my address to get rejected), mentioned the irony that I even write news for Huffington Post from time to time, and explained that I'm at wits' end, and will probably need to write a story on this at this point to let people know that AOL is censoring their users emails!

But I did receive a note from an AOL user I know, who I'd explained the situation too (when they contacted me wondering why they had received a notice that they were being automatically unsubscribed from my mailing list). They said they'd asked a friend to send a note with BradBlog.com in it to them and, though "it took a while," they said it made it through!

Great! The call to the "Corporate Media Inquiries" department did the trick, I guess! Right? Not right.

I replied to my AOL friend (from a non-BradBlog.com) address, with the text of their email quoted --- the one that contained www.bradblog.com in it --- and the message immediately bounced. Same error. Same hell.

In my second-to-last ditch effort today, nearly a full week into this nightmare, nearly a full week since colleagues on my email alert list have not been receiving my emails, I once again filled out the same "AOL Postmaster" form for, perhaps, the 5th or 6th time. You know, the one that tells me after I've completed it that I'll get a "confirmation email" that never comes? This time, I got a different response after filling out the form: 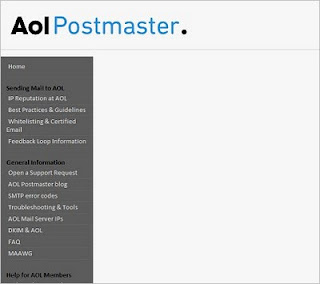 Yes. A blank page. A blank page with nothing but their sidebar on it. No message. No nothing. At least its more honest.

At that point, I figured I'd better write this article if, for no other reason, some folks with AOL addresses may be wondering why they're not getting their usual email news alerts from me. This is why.

But also because the world should know how easy it apparently is to keep AOL users from getting links to "objectionable" websites if enough "substantial complaints from AOL members" are made. Neat trick, huh? Let's keep that one in our back-pocket, shall we?

Oh, and also I thought the world should know that AOL is censoring its members' email and they know nothing about it! And if your own website gets caught in that censorship there is almost nothing you can do about it!

I'm reminded of a similar incident that occurred with Comcast back in the summer of 2005 --- which we covered exclusively here --- as they, the nation's largest email provider, were not allowing emails to go to users if they contained "AfterDowningStreet.org" in the body of the email.

We eventually were able to learn from Comcast that the problem was due to some automated anti-spam program that triggered a filter to block emails that had URLs which had suddenly become very very popular on the Internet, under the presumption that they must be spam. Or so Comcast claimed anyway. It was a very politically charged summer, and the AfterDowningStreet.org site was reporting on information which argued that Bush had determined to go to war in Iraq whether there were WMD there or not.

The problem was eventually corrected and AfterDowningStreet.org was removed from the filter. But a month or so later --- as Cindy Sheehan took up her famous stand in Crawford, TX, urging Bush to meet with her to explain the "noble cause" for which her son had been killed in Iraq --- emails containing "meetwithcindy.org" were similarly filtered out by Comcast and never reached their intended destination. We reported on that incident here.

In many ways, the Comcast incident was arguably even worse than AOL's shame, in that their system didn't even bounce an error message back to the sender. The email was sent off, and nobody ever even knew that it didn't arrive.

Well. Sorry for the long explanation, but I feel better having gotten it out of my system --- even though, as of now, it is likely that AOL members cannot get emails which contain links to this news site in them.

If my contact at AOL cares to offer a response from the "Corporate Media Inquiry" department, I will, of course, be happy to run it (as I offered him originally --- but he chose to try and solve the problem, rather than give an on-the-record comment for now, which I actually appreciate.)

But, sorry. This is all bullshit, and folks need to know.

AOL members who wish to complain, request they be allowed to receive emails with BradBlog.com in them, or would prefer to switch to an email provider that doesn't censor their mail without telling them first, can call: 800-827-6364, or they can be ignored via the AOL feedback page here.


UPDATE: Another AOL user tells me via Twitter: "I just sent from AOL to AOL with your domain and it works; only from outside AOL in fails."

That would explain why my AOL friend was able to receive an email with my domain it from another AOL user, and why my reply to her, quoting the same email, failed. Fail. Fail. AOL. Fail.

UPDATE 4/23/11, 5:11pm PT: Just a quick update for those who've asked. Yes, emails containing links to any page at BradBlog.com are still blocked when sent from any non-AOL address to an AOL user. This is more than 24 hours after I directly notified and spoke to their Corporate Media Inquiries division, who promised they'd escalate the issue. And just about a full week since I was initially notified about the problem in the first place, and began my full week of of endless tech support calls and written complaints via the form mentioned above at the "AOL Postmaster" site. Still censored.

Interestingly, someone pointed me towards an article posted in 2004 with the exact same problem with AOL. The article sounds almost identical to mine, in both the description of the problem, and the serious issues it presents about how this AOL "feature" could be used nefariously. The article is no longer available at its original address, but the cached version is at Archive.org is right here.