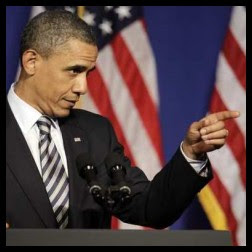 After revealing his "long form" birth certificate Wednesday, President Obama scolded the news media for letting this non-issue become a national obsession. But if President Obama really wants to restore reporting to its rightful role, he needs to act on commitments he made immediately after his inauguration. As I wrote in September 2009 for The BRAD BLOG:


Shortly after Barack Obama was sworn in as President last January, as Brad Friedman reported at the time, the new White House website "Technology" page signaled a hopeful change, and a call to re-examine the oversight of our public airwaves:

Okay, let me connect some dots here. For more than two years, GOP extremists have made the President's birth certificate an issue that has successfully permeated the country's consciousness. According to a New York Times-CBS News poll last week, 43% of the country is not sure Barack Obama was not born in this country, despite long standing factual evidence to the contrary.

How did GOP extremists manage to make a non issue such a huge issue? They used the power of broadcasting to beat the drums of paranoia into 50 million people across our land. They used the power of talk radio, which they have used to successfully marginalize Democrats and anyone else outside their narrow point of view.

That's right. According to Arbitron, 53 million people listen to talk radio every day in this country. When Glenn Beck loses his Fox "News" audience of 2 million, he still will have his radio audience of 10 million. According to Katz Radio Group (subsidiary of radio giant Clear Channel) President Mark Gray, "The weekly reach of radio is higher now than it was three decades ago -- yet the power of radio to reach and influence consumers unfortunately remains a bit of a well-kept secret."

What's an even better kept secret is that roughly 95% of this nation can hear only Right Wing Hate radio on their commercial dial. Progressive voices are purposely kept out of the national discussion on our publicly owned airwaves. (It's like gatekeepers keeping progressives out of our national parks, only much more important.)

Which takes me back to the first of the President's commitments: "ENCOURAGE DIVERSITY OF OWNERSHIP IN BROADCAST MEDIA."

How can the President keep his commitment to the American people? He can call for a bill to be introduced in Congress which would rewrite radio ownership rules, rolling them back to pre-1996 levels, which would mean one owner could have 20 FM and 20 AM radio stations, rather than the unlimited numbers they can own today following passage of the Telecommunications Act under Bill Clinton. If more than just six "persons" were in charge of radio, as is now the case, we would naturally get more diversity of political thought, more debate over real issues, and more localism, which once was the hallmark of terrestrial radio.

There has traditionally been bi-partisan support for this action, but it has lacked one key component: leadership.

In fact, as Brad Friedman would later note at Alternet, by the summer of 2009, the President's hopeful call for reform of media ownership rules on his White House "Technology" page "had been quietly excised from the White House website without a trace, apology or even an explanation."

For whatever reason he chose to back off then, hopefully the past two years have made the problem of the wholesale rightwing takeover and corruption of our public airwaves clearer to the President than ever before.

The other key media commitment the President made, at least for a short time, back in January of 2009 was to: "CLARIFY THE PUBLIC INTEREST OBLIGATIONS OF BROADCASTERS."

It is critical to understand that we the people own the airwaves. Broadcasters, (local TV and Radio stations) own a lot of fancy equipment which allows them to broadcast over OUR air. They made a business deal with us that they get to broadcast over our air ONLY if they serve the public interest. (This differs from cable TV; once you write a check to Comcast you make a business deal with them to get programming over their cables. It's an important legal distinction.)

After the Reagan administration tossed out the Fairness Doctrine, broadcasters pretended that they had no further public interest obligations. It's another falsehood the right wing is perpetuating, and the President clearly knows it; but their obligations to We the People are no longer well defined. Broadcasters still are required to write reports to the public over how they are operating, on topics like children's programming and shared service agreements between stations that reveal how one news staff is shared by more than one station, but very little else.

And now, in a quiet behind the scenes effort, broadcasters are trying to wiggle out of doing even that. In a tiny April 7th notice [PDF] by the Federal Communications Commission (the agency which is to oversee broadcasting and supposedly ensure the use of the public airwaves in the public's interest) broadcasters, in the name of reducing paperwork, are trying to squeeze a rule change through so they no longer have to report to the public at all. (We have until June 17 to fight this back. Please see this urgent action and make sure broadcasters still have to report to the real owners of the airwaves, you and me!)

On this, the President needs to take control of his FCC and formulate real public interest obligations. Commissioner Michael Copps has created a good list [PDF] for starters. President Obama needs to throw his weight into that effort.

This corporate owned media needs more than a tongue lashing: The President, our Congress and We the People need to take action -- executive, legislative, and judicial -- to restore real fairness and balance to our broadcasters and to our democracy.

The time is NOW.


* * *
Learn lots more on these topics at SueWilsonReports.com and find out what public interest obligations really should look like in my documentary film, Broadcast Blues.

Sue Wilson is a media activist, director of Public Interest Pictures' Broadcast Blues, and a 22 year veteran of broadcast journalism. Her numerous awards include Emmy, AP, RTNDA, and PRNDI for work at CBS, PBS, FOX, and NPR. She is the editor of the media criticism blog, Sue Wilson Reports.