3) Cut out all ethical statements by NPR;  edit video to mislead viewers about bias by NPR reporters and staff;

4) Farm video out to all major news organizations;  get media critic Howard Kurtz to do softball TV interview ignoring the deception; specifically get FOX news to promote the deception as fact.

5) Leverage publicity so the GOP can introduce an emergency House bill to defund NPR. 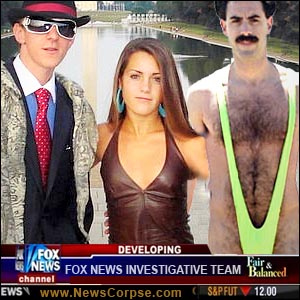 "Project Veritas" is textbook O'Keefe, whose phony ACORN story (discounted by the BradBlog but promoted by the New York Times, who reluctantly issued a partial correction) effectively closed down that community organizing group, despite attorney generals' investigations that ACORN had been duped by O'Keefe and had done nothing illegal. (O'Keefe, however, has pled guilty to breaking federal laws in similar sting operations.) Similar tactics have recently been employed against Planned Parenthood.

But here's the real story:  this new model of attacking politcal opponents by staging outlandish phony hidden camera stings is just the latest of strategies developed over a generation to blur the line between fact and fiction.
In a 2005 interview for my documentary film Broadcast Blues, David Brock, former Conservative writer and founder of the liberal watchdog group Media Matters, told me, "The conservative movement going back to 1969, has had a coordinated and well financed attack on journalism in this country.  While they claim that the complaint is one of liberal bias, the real goal is to disable journalism from being able to do its job independently and neutrally.­"

That's the rub:  If O'Keefe can convince us (and the New York Times and Howard Kurtz and so-called mainstream media) that he is a legitmate journalist, he can wield tremendous power over the political system.  But O'Keefe is no more a journalist than he is Superfly, despite portraying himself as such to the American people.

What O'Keefe really does is much like Allen Funt's "Candid Camera." For the younger folks who haven't seen the 60's vintage TV show  (where are those reruns today?) it was like the movie Borat.  Producers would create some crazy set up, then would roll hidden cameras to see how people would react.  (Like making it look like a chimpanzee was driving a cab, then trying to catch a cabbie complaining about the monkey not having a driver's license.)

Funt was clearly a comedian; Sasha Cohen's Borat pushed the envelope on what constitutes "documentary" filmmaking.  Neither presented themselves as "News" producers, and as TV and film producers must obtain signed releases in order to use the sometimes embarrassing footage they shoot.  (Borat's producer had people sign their releases before he staged his stunts;  many later filed lawsuits, complaining they didn't know what they were getting into.)

Political provacateur James O'Keefe, however, is a different animal.  Like Funt and Cohen, he entraps people with outrageous situations, then edits their responses in a false way to make them appear even more outrageous, potentially even criminal.  In the tradition of comedy and entertainment, O'Keefe could be considered a genius.  But instead, he calls himself an investigative journalist, besmirching not only the victims of his deception for political gain, but tarnishing the entire field of journalism as a result.

A real investigative news journalist operates under different rules than reality TV show or film producers.  In the pursuit of reporting real news, news journalists don't get peoples' permission to use their voice or images. So by calling himself a news producer, O'Keefe apparently thinks he operates with impunity.  (This is where a credentialing agency would be helpful, or a lawsuit from NPR.)

Real journalists are also bound by ethical standards, especially when employing hidden cameras.  In guidelines developed by the Radio Television News Directors' Association, (RTNDA) journalists may use a hidden camera to reveal those truths that cannot be revealed in any other way. Here's an example of legitimate use of a hidden camera by an investigative reporter:  a reporter may pose as a cattleman, then secretly tape the processes in a meat packing plant to discover whether downed cattle are being ground into hamburger.  The point is not to entrap the meat packer, but to reveal activity that has a significant impact on public health that's going on behind closed doors.

O'Keefe clearly is no journalist, but we the people don’t seem to know the difference anymore.  It is time we make that distinction, and it is time traditional news organizations like the New York Times (which enabled this monster to be) helps makes that clear.