October 22, 2012
Wisconsin Congressman Paul Ryan stepped into the vice presidential debate prepped with a cadre of misstatements to confuse voters (24, according to Think Progress' count.) But he didn't get away with much, what with Vice President Joe Biden giving him a drubbing ("Facts matter," Biden said again and again) and moderator Martha Raddatz repeatedly holding his feet to the proverbial fire.  No wonder he seemed rattled; he's never faced hard questions before.
.
The seven term congressman from Southeast Wisconsin is not used to reporters verifying statements or holding his feet to the fire because, throughout his career, he's been well coddled by Big Media owners so blatantly right wing they publicly brag about their power to get Wisconsin Republican candidates elected. 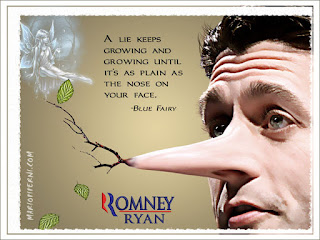 .                                    Courtesy MarioPiperni.com
.
The Milwaukee media market is unique (note: Ryan's 1st District does not include Milwaukee but is a mere 10 miles south, and Milwaukee media dominates it, as well as much of Wisconsin.) A single corporation, Journal Communications, owns Milwaukee's Journal Sentinel newspaper, TV station WTMJ, and uses its 50,000 watt radio giant WTMJ as an unabashed cheerleader for all GOP candidates, especially Ryan. Clear Channel Communications, which owns six radio stations in Milwaukee, joins the Republican lovefest on its own 50,000 watt blowtorch WISN. Their political preference and clout is so clear, critics in the community call WTMJ and WISN "WGOP."
.
Five local right wing radio hosts hold court fifteen hours a day, every Monday through Friday, from studios in Milwaukee. Charlie Sykes, Mark Belling, Vicki McKenna, Jay Weber, and Jeff Wagner dominate signals that travel hundreds of miles and reach millions of people in four states. They wave the flag in one hand and the Bible in the other, whipping up fervor for their favored Republican candidates, meanwhile lying to audiences about facts of importance and propping up falsehoods of those same "moral" GOP candidates they promote without question. Daily they mischaracterize and demonize Democrats, but never do they allow them on the air to mount a defense.
.
These facts are backed up by a study Media Action Center conducted during the Scott Walker recall campaign. MAC found that during the four week election, the Milwaukee marionette manipulators gave about 160 minutes of airtime every day to supporters of Scott Walker and the GOP to specifically promote their candidates, but abjectly refused to allow supporters of Democratic candidates any access to their giant microphones whatsoever. Add it up, and WISN and WTMJ radio gave Republicans more than a million dollars in free airtime -- plus a keen venue for the GOP to misinform the public about their opponents without recourse.
.
Given that those radio airwaves legally belong to all the public, not just the Republicans, you'd think there'd be a law against it. Actually, there is a law against it -- sort of.


.
Section 315 (a) of the Communications Act is the law that says if one candidate gets broadcast airtime, the opponent must be afforded equal time, if that candidate requests it within seven days. An FCC rule called the Quasi-equal Opportunities Rule, or "Zapple Doctrine," expands that law to include supporters of candidates. It says, in the 60 days before an election, if a broadcaster provides time to supporters of one major party political candidate, it must provide comparable time to to supporters of the opposing candidate.
.
Supporters of Democratic gubernatorial candidate Tom Barrett did request comparable time from WISN and WTMJ throughout the Walker recall campaign, but were either denied or ignored. So right in the middle of the recall campaign, Media Action Center filed an urgent complaint to the Federal Communications Commission to enforce the Quasi-equal Opportunities Rule.
.
Given the Constitutional issues surrounding the case, MAC did not expect an answer in time for citizens of Wisconsin to obtain redress in the remaining two weeks of the recall campaign. The case pits the First Amendment rights of broadcasters against the Free Speech rights of the actual owners of the airwaves, We the People, and it understandably would take a bit of time to sort out. Luckily, the Supreme Court is on the Peoples' side. In the seminal case Red Lion v FCC, SCOTUS ruled that "The First Amendment is relevant to broadcasting, but it is the right of the viewing and listening public, and not the right of the broadcasters, which is paramount." And "The First Amendment does not protect private censorship by broadcasters who are licensed by the Government to use a scarce resource which is denied to others."
.
But given the political significance of the complaint (and analysis by some in the radio industry,) one would think the FCC would have found time to make a decision prior to the 2012 general election so Big Media owners could not continue to censor the political voice of nearly half the U.S. population during a critical campaign. But the FCC remains silent.
.
This is not new behavior for the FCC: as documented in my film Broadcast Blues, the FCC routinely ignores the public whose interest it is tasked to serve; the agency often doesn't even bother to notify legal petitioners with results of their decisions. (As the theme song from the film sings, "If you stand up to the FCC, all you hear back is BFD!") As noted by media attorney Harold Feld, the FCC doesn't even abide by the SCOTUS Red Lion decision defending the public interest, apparently because FCC lawyers don't like that law.
.
But Broadcast Blues also warns the FCC that if it will not stand up for We the People, We the People are standing up for ourselves. "This is OUR media, and we are taking it back!" Hence the genesis of Media Action Center.
.
MAC is striving to further these goals at next year's National Conference for Media Reform. Please help make it happen by voting for our panel.  Votes must be in by Friday Oct 26th.
.
Help us pressure the FCC into acting on behalf of the public interest, not just the Republican interest.