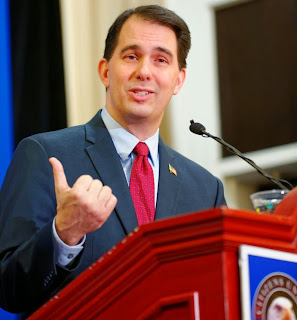 
This is all related to what Media Action Center (MAC) members discovered during the 2012 recall campaign when talk hosts on Wisconsin radio giants WTMJ and WISN gave hundreds of hours of free airtime for GOP luminaries like Republican National Committee Chair Reince Priebus and Wisconsin GOP Vice Chair Brian Schimming in order to promote and recruit volunteers for Walker during that contentious campaign....

Supporters of Walker's opponent, Democrat Tom Barrett, contacted the two stations asking for comparable time under a long-established FCC rule called the "Zapple Doctrine," and were denied their request. It was one year ago when the Federal Communications Commission (FCC)'s Media Bureau, in response to complaints filed by MAC, publicly decided that Zapple is no longer in effect, making it perfectly legal for radio stations to provide millions of dollars in free airtime over our public airwaves for political operatives to promote and even recruit volunteers for their candidates' campaigns, without allowing supporters of opposing party's candidates on the air at all.

In doing so, the FCC cited the First Amendment rights of the radio stations to promote whomever they wish (even though the opponents' supporters equally own the airwaves, but aren't allowed access to the microphones.)

MAC (of which I am the founder,) could have appealed the stunning FCC decision, but with the public interest attorneys tied up with issues related to the FCC's Net Neutrality ruling, there was no one available to assist. Plus, we always knew that the original Zapple Doctrine was a hybrid of the Fairness Doctrine rule and Section 315a of the statutory Communications Act, which guarantees equal time for political candidates. We knew the FCC could go one of two ways with its decision: the agency could endorse comparable time for candidates' supporters under Section 315a of the federal law, or it could take the easy way out and say the Zapple Doctrine was thrown out along with the Fairness Doctrine --- a set of rules formerly used by the FCC to help interpret and enforce the Communications Act.

No surprise, the agency took the easy way out and declared that when the Fairness Doctrine was killed (at the request of Ronald Reagan in the 1980s), so was the Zapple Doctrine along with it.

Still, we had to file the Complaint to make the point that giving hundreds of minutes of free air time to just one political party, the equivalent of hundreds of thousands of dollars of in-kind contributions to that party's candidate --- over our publicly-owned airwaves --- is not the way it should be. Sometimes you have to firmly establish something is wrong before you can make it right.

It didn't take long for the Right Wing spin machine to turn the ruling on its head to claim a giant victory for the First Amendment. Just one week after the FCC decision, Republican FCC Commissioner Ajit Pai (well known for his partisan political antics) wrote a piece for the Right Wing website RedState.com, entirely mischaracterizing MAC's case while waving the flag of First Amendment "free speech". His Orwellian summation:
The end of the Zapple Doctrine presents an important lesson: There will always be someone eager to manipulate the levers of government to serve a political end. It is our responsibility to stand against such efforts and the tactics of political intimidation. We must continue to reject attempts to micromanage the marketplace of ideas and limit media choices. We must continue to empower consumers to make their own decisions and give news outlets the flexibility to make their own editorial judgments. And we must always stand up for the First Amendment --- even when, especially when, it's "controversial."

Unfortunately, that sort of up is down argument has now become all-too-typical GOP rhetoric. Deny your political opponents free speech on the airwaves we ALL own, then call it a victory for the First Amendment.

Republicans silencing opponents while claiming violation of First Amendment free speech rights is becoming a familiar meme, one that, once again, leads directly back to the Scott Walker recall campaign --- and to Right Wing talk radio.

There have been two investigations into illegal activity by Presidential hopeful Scott Walker's campaigns for Governor. The first of the two so-called "John Doe" investigations by state prosecutors netted six convictions of his top aides. That probe also revealed that the Walker campaign had directly coordinated with WTMJ talker Charlie Sykes, one of five right wing hosts spotlighted in the MAC case.

The second John Doe investigation is looking into illegal collaboration between Walker's campaign and various dark money groups, including Americans for Prosperity and The Wisconsin Club for Growth (WiCFG), during the recall. That probe focuses on political tactics that, among other things, allowed Wisconsin billionaire John Menard, Jr. to secretly donate $1.5 million to WiCFG, which then allegedly funneled it into Walker's recall campaign, followed by giant business awards from Walker gubernatorial administration. As investigative reporter Michael Isikoff wrote for Yahoo News in March:
Some court records that have been made public about the new fundraising probe, known as "John Doe 2," show that, when he first faced a potential recall election in 2011, Walker had personally solicited donations to the Wisconsin Club for Growth in order "to ensure correct messaging" in ads that were supporting his policies, according to an email sent by one of his fundraisers. His aides referred to the group as "your 501c 4," a reference to the provision of the tax code under which nondisclosing advocacy groups are organized.

Key to the effort, the email indicated, was secrecy. "Stress that donations to WiCFG [Wisconsin Club for Growth] are not disclosed and can accept corporate donations without limits," reads one June 20, 2011, email from a Walker aide to the governor prior to one of his out-of-state fundraising trips. "Let them know you can accept corporate contributions and it is not reported."

Such tactics are illegal in Wisconsin, but Walker attorneys have been battling the state investigation in federal courts, arguing --- what else? --- that the fundraising groups' First Amendment rights are being violated by the investigation. Writes Isikoff:
One federal judge, concluding that the investigation was a violation of the free-speech rights of the advocacy groups, ordered last year that the probe be shut down and directed prosecutors "to permanently destroy" all the evidence they had obtained. That order was later reversed, and next month the Wisconsin Supreme Court will hear arguments on whether the investigation should proceed. The outcome could well determine whether Walker will be confronted with questions about the secret donations --- and any benefits the contributors might have received --- while he runs for president.

Which brings me back to talk radio. "John Doe 2" revealed that, at the same time MAC was requesting comparable air time for Walker's opponent during the recall, WTMJ's Charlie Sykes wasn't just exercising his Freedom of Speech, but may well have been directly coordinating with the Walker campaign. And not just Sykes, but radio talker and Fox "News" host Sean Hannity as well.

According to Marie Rohde at WisPolitics.com last year:
John Doe investigators planned to issue subpoenas and search warrants for radio personalities Charlie Sykes and Sean Hannity as part of their secret probe into coordination between conservative groups and Gov. Scott Walker's campaign, according to a lawsuit released today.

Why, exactly, Sykes and Hannity were to be subpoenaed, we do not yet know. The Wisconsin Supreme Court has itself been acting in secretive ways, not even allowing oral arguments to be heard in the case, as Lisa Kaiser of Milwaukee's Shepard Express' reports. Hopefully, when the Court makes its decision, we'll find out.

Unless, of course, making public information available to the public somehow violates the First Amendment.