Supreme Court: Say no to the FCC and #SaveLocalNews!

The last act of the Trump administration may prove to be the most damaging. 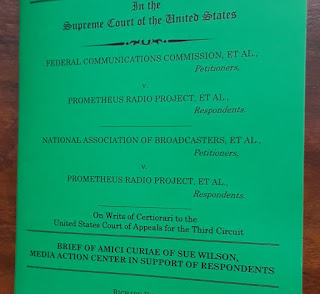 The Supreme Court will hear a case January 19 which, if decided in favor of the Federal Communications Commission, will accelerate this country’s mis- and disinformation crisis. In FCC v Prometheus, the FCC, under direction of Trump designated Chair Ajit Pai, is trying to change local broadcasting rules so one company could own the local newspaper, all or most of the TV stations and all or most of the radio stations - in the same town. One voice, one community, no opportunity for dissent.

The agency legally tasked to “serve the public interest, convenience and necessity” has acted to eliminate public debate for decades; those FCC actions over time have directly led to the crisis in the nation’s Capitol today.

The propaganda of World War II taught our leaders to safeguard the publicly owned airwaves from one single voice gaining too much power. The best way to serve the public interest was to ensure the public could have access to the airwaves we collectively own. So Congress established limits on how many stations a single operator could have to ensure diversity of voices. The FCC established the Fairness Doctrine, which required radio and TV stations to “afford reasonable opportunity for discussion of conflicting views on matters of public importance.” They established the Personal Attack rule, which provided anyone attacked personally on our publicly owned airwaves the opportunity to respond on the air. There was the Political Editorializing rule, which said if a station editorialized against a candidate for public office, it would offer an opportunity for a response.

Starting in 1987, the FCC took away the public’s opportunity for give and take by eliminating all those rules and more. The agency has even recently removed its prohibition of “incitement to violence” from its website.

In 1996, Congress allowed one operator to control as many radio stations as they could buy. Just a handful bought all the best radio real estate, then excluded liberal and moderate shows from being on the air.

That takeover of who may speak and who may not respond into microphones has literally divided our culture. Sean Hannity’s radio show (which has 15 million listeners, as opposed to the 4 million viewers he has on Fox News,) is rated by conservatives as the second most trusted news source in the country; Rush Limbaugh follows as third with his 15 million listeners (according to Pew Research.) Talkers Magazine data indicates 100 million people listen every day to what was once considered “Conservative” but now is clearly Right Wing talk radio hosts. Certainly there is some overlap of those listening to multiple programs, but that number is up from Talkers research showing 60 million listeners in 2016.

Six days after the 2020 election, Limbaugh told his audience, “There's simply no way Joe Biden was legitimately elected president. I just can't believe it. I do not believe it. Intellectually and as I look at what I have learned and what I have seen over the course of the past four, five days, there's simply no way.” Unlike yesteryear, no one was allowed an opportunity on the air to counter that fiction in a meaningful way (people can call into the program, but calls are screened, and generally only less informed callers are allowed on the air.) Same when Hannity told his radio audience on December 18, “There's no doubt this was stolen. No doubt whatsoever. I don't have any doubt in my mind.”

So people who listen to these programs on hundreds of stations nationwide dominating the drive-through states and brainwashing middle America, absolutely believe the election was stolen, even though Court after Court has ruled there is no evidence that occurred.

Now the FCC is attempting to do to local TV news what it has done to radio.

In an Amicus brief in FCC v Prometheus, Media Action Center details research proving the FCC is already allowing Sinclair to control three of the seven local TV stations in Columbus, Ohio, the State Capitol. Those stations are running exactly the same local news content on their websites. This pattern plays out in dozens of local TV markets across the United States, and not just with Sinclair.

So the FCC allows a single operator to control virtually all the local reporting in any one community. What’s the worst that could happen?

In 2009, then Rep. Mike Pence told C-Span his “Broadcaster Freedom Act” would simply “take away the power of the Federal Communications Commission to restore the Fairness Doctrine without an act of Congress.”

I disagreed with him then, but I see the wisdom of it now.  Decisions like this are above the FCC’s pay grade.

Find the Media Action Center Amicus Brief at the Supreme Court detailing how the FCC is looking the other way while TV industry chief are quietly taking over local news here, and tune in to CSPAN tomorrow at 10 AM EST to hear oral arguments.