Step Up to the Microphone!

Scan across just about any radio dial in the entire country, and you'll hear exactly the same big city, big corporate programming: Rush Limbaugh, Fox Sports, Top 40, NPR.
.
But what about local programming? Where are the reporters covering the city council or the county board of supervisors? High school football or Little League? Bake sales or community events? This kind of homegrown programming was once the heart and soul of radio. It formed a public square that informed listeners about the community's very identity.
.
We've missed that spirit of radio since 1996, when Bill Clinton and Congress decided to allow a few national companies to program the entire nation with their corporate choices of music, sports, and political talk, local needs be damned. 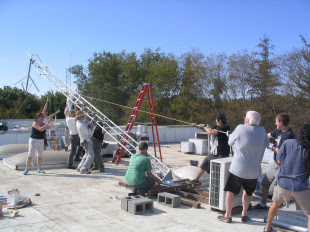 But thanks to activists ranging from the Philadelphia area Prometheus Radio to the Davis, California non-profit Common Frequency, the true heart and soul of radio may be coming back -- if people in local communities choose to be the media they want to hear.
.

The Federal Communications Commission, which oversees broadcasting, has been under pressure to allow new low power FM frequencies so that a diverse array of local people can once again have a voice in their own communities. Those frequencies are typically 100 watts in power, and broadcast about ten miles from the source. It was easy to find available frequencies in rural areas, but predictably, the big corporate engineers lobbied the FCC hard to prevent new stations in urban centers. (They claimed these small radio stations would interfere with their giant signals.) But the little engineer who could, Common Frequency's Technical Director Todd Urick, provided the FCC with incontrovertible studies which showed how new local radio stations could be carved out in urban centers nationwide.
.
That paved the way for hundreds of new opportunities for community groups to get their own radio stations in areas where their voices are squelched. Now there is a chance for local people in local towns to get on a microphone that can potentially reach tens or hundreds of thousands of local listeners. It's a once in a lifetime chance to feature local musicians, local politics, local events and more. Most urban centers will have more than a dozen available frequencies to give voice to the community, and in rural communities, the sky is the limit for people to step up to their own microphones.
.
But will all of those frequencies actually end up becoming real radio stations? So far, the answer is unclear. Non-profit groups, unions, tribes, schools and government agencies need to apply for these very scarce frequencies, and the clock is ticking: the window to apply with the FCC will open October 15 and will close -- forever -- just two weeks after that.
.
But despite outreach efforts, even from the FCC itself, very few even know about this opportunity to broadcast exists. It would be a shame to let this chance go to waste.
.
Yes, it will cost some money to get started, and yes, it will take commitment to see it through. But for the cost of just a few political ads, communities can again have a vibrant voice in their communities -- forever.
.
So who will stand up to the microphones?
.
Learn more at www.lpfmNOW.org , and be the media you want to hear on our publicly owned airwaves!