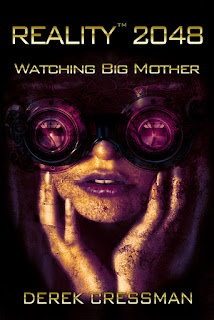 .
Vera works for Globalia’s Department of Information as a researcher tasked with condensing complex history lessons into 20 words or less; accuracy is demanded, but she finds truth is often lost. As a member of the Establishment, her brain has been chipped with MyndScreen virtual reality and apps with familiar names like Noodle and Chatter. She has rare intellectual curiosity, but is aware her mind is constantly data mined and if she delves too deeply into truths, she will leave metadata tracks to follow.  If caught, they will upgrade her brain chip, and 34 year old Vera will retire well cared for in a home but brainfed a 24-7 diet of Gladiators or Big Mother reality shows, unable to turn off the channel.
.
Still, in a world that tells her “Advertising Frees Speech,” she yearns for the Pre-Globalian principle of real free speech, so finds ways to trick the data collectors so she can freely research. She falls in love with Chase, a kindred spirit who takes her on outings to rural areas beyond metadata reach and frees her mind – and body - for the first time.
.
Vera is so changed she talks Chase in to risking it all to join the underground group the Sisterhood to overthrow the mind numbing Establishment. She says, “we are so inundated with episodes and jingles and ads and facts and flavors and gladiators and chatter and news programs and celebrities and lies and fashion and music and even the truth that we have lost the capacity to think for ourselves. It’s not so much that we want to join the Sisterhood, but that we need to.”
.
The Sisterhood teaches them the ignored history of nuclear war and all that had occurred since the 20th century to create the culture of 2048.
.
What happens next is breathtaking and entirely unpredictable… or then again, perhaps it is the only possible outcome.
.
The ultimate question Cressman asks is what happens if people know they are misled but they just don’t care? As one character says, “A fact is a fact. They have nothing to do with reality.”
.
Especially when Reality is trademarked.
.
Derek Cressman’s REALITY ™ 2048 is a novel of great consequence, one from which I will not easily escape.